Disney+ – A Turning Point in the “Streaming Wars”

Disney+ has officially launched, two years after its initial announcement, creating a new contender in the “Streaming Wars”.

The new streaming service enters a highly competitive market, hoping to differentiate itself with its extensive content offerings. The service is available only in the USA, Canada and the Netherlands to start, but has been generating worldwide social media attention for some time. From January 1st to November 11th, 2019, on Twitter, Disney+ was mentioned 4.7M times worldwide, with conversations about competition with other available streaming services accounting for 434K conversations, or 9% of overall mentions.

From the day the service launched, November 12th to November 18th, Disney+ was mentioned more than 3.8M times, including 427.6K conversations about the competition. 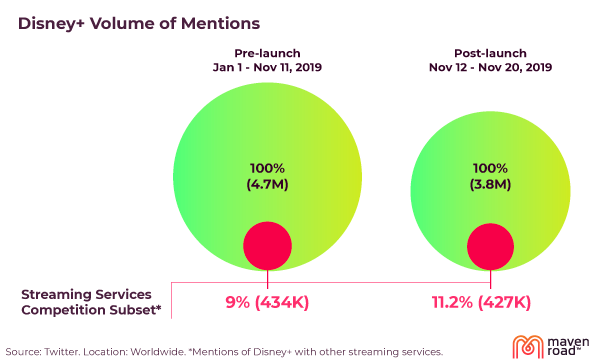 Most conversations contributed to the general debate about competition between streaming services (38% of mentions pre-launch and 32.4% post-launch). In most posts, users posed questions to other users concerning which platform they would prefer, or discussed the benefits and drawbacks of each one (60.2% pre-launch and 68% post-launch).

The rest of the conversations focused specifically on Disney+ and Netflix as the main players in the “Streaming Wars” (39.4% pre-launch and 32% post-launch). Users stated which platform they believed would “win” the war. Most of these users sided with Disney+ (51.1K pre-launch mentions and 32.3K post-launch). These users stated that they believed it was the better platform and would beat Netflix in the “Streaming Wars”; many wrote that Netflix should feel threatened by the arrival of Disney+.

Netflix supporters were outnumbered in these conversations, with only 2K posts endorsing the service before Disney+ came out; many of those users pointed out that it had the advantage in terms of the amount of original content on the platform. In the 9 days following the debut of Disney+, the number of posts supporting Netflix increased by 5.5%. Many users wrote that they considered Disney+ a platform just for children.

Users posting that they believed there wouldn’t be a huge shift in users from one platform to another, and that the platforms could co-exist, decreased by almost 5% in the conversations prior to the launch vs post-launch (11.9K vs. 2K post-launch).

Note: “Disney Launch” mentions were only found among Pre-launch mentions; these posts were primarily about the announcement of the launch of Disney+.

From January 1st to November 11th, 2019, 11% of posts (47.3K) focused on the content offered by Disney+. The majority of users posting about this topic mentioned that Disney-owned movies and shows, including Marvel and Star Wars, would be leaving Netflix and would only be available on Disney+ (25.2K mentions, 53.2% of Content-related posts). Among the remaining conversations (22.1K), users voiced excitement that the new Star Wars series, “The Mandalorian”, all Disney classics, and content like The Simpsons, would be part of the large library on Disney+.

After the release of Disney+, 5.3% of posts focused on the content of the different platforms. Some users were excited about the deal between Netflix and Nickelodeon to provide new original animated content for kids based on the Nickelodeon library of characters. Many users that already subscribed to Disney+ praised the content but complained about the lack of the “keep watching” feature.

Users also mentioned the bundling of Disney’s three US streaming services (Disney+, ESPN+, and Hulu) for $12.99, which is the same price of the most common package of Netflix (11.7% of total pre-launch mentions and 10.7% post-launch). Most commentary surrounding the bundle was positive, with users praising the wide variety of content across the three streaming services.

Migration from Netflix to Disney+

Prior to launch of the Disney+ service, 14.6% of overall conversations were about future migration of subscribers to Disney+.  45.8K users said that they already had or would migrate from Netflix to Disney+ because of a better and larger library of content (41.2%) or due to the lower price (11.6%).

Only about 3K users were sure they wouldn’t make the switch (5.2%). The remaining 14K users expressed that they needed more time to better assess whether or not they should unsubscribe from Netflix.

Throughout the first 9 days that Disney+ has been available, conversations around migration to the new platform accounted for 15% of overall mentions (66.3K). Most users said they were moving to Disney+ (46.6K, 70.3%). Other users that stated that they preferred not to move to the new streaming service (6.8K, 10.3%). Around 13K users expressed indecision about a possible migration (19.4%). 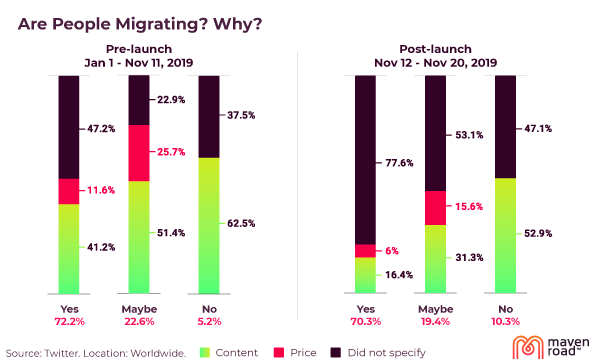 In the first 9 days following the launch of Disney+, users stating that they subscribed to more than one streaming service accounted for 52.7K mentions (70.5%).

Considering comments of users made both prior to and following the launch of Disney+, what unites these three types of users, regardless of their choice, is the opinion that streaming services are too many and buying more than one to access a more varied content is becoming too expensive (3.2% pre-launch mentions and 3.7% post-launch); users expressed that this is why they considered accounts sharing is necessary and content piracy could be an option.

While these data indicate that users have responded favorably to Disney+ and that many have migrated or expressed a desire to migrate to the new platform, it is still too early to fully understand what will be its impact on the market, especially until it expands to reach more countries around the world. Additionally, given the commentary by users stating a willingness to subscribe to more than one streaming service, it’s hard to predict if Disney+ is really going to marginalize the competitors and dominate the entertainment industry as most users think, or if the multiple streaming services will coexist.

To complement the previous analysis, we decided to dive into the audience discussing the streaming services competition to identify the share of users that would potentially subscribe to each of the 6 platforms: Disney+, Netflix, Hulu, AppleTv+, PrimeVideo and HBO Go.

Below, we describe the process we used:

We downloaded a sample of 60K users, selected from 434K conversations about the streaming services competition from January 1st to November 11th, 2019. We removed the accounts of organizations from the sample. 38K accounts remained.

The posting activity timelines of those 38K users were downloaded.

We downloaded posting activity / timelines of these users and analyzed posts from the users that were about one of the 6 platforms under analysis (Disney+, Netflix, Hulu, AppleTv+, PrimeVideo, HBO Go) and analyzed whether they follow handles of those platforms’ original and exclusive content.

We created a score that represented the frequency with which the users mentioned original and exclusive content from any of the 6 platforms.

Another score represented the number of handles or accounts of the original and exclusive content of any of the platforms that the users followed.

Finally, we compared the scores of each user to determine for which platform they may be or may become subscribers. 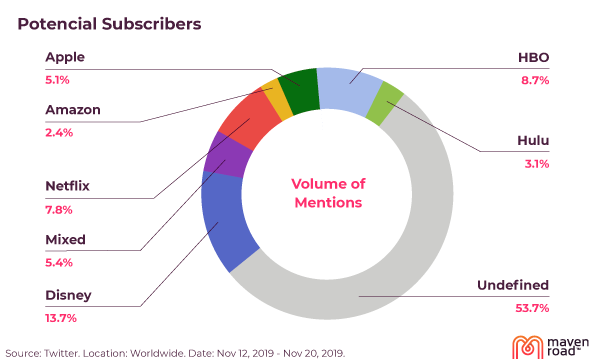 In the second step of the research study, we decided to create a network and identify communities of users that share affinities.

We created a network of 20K users, extracted from the initial sample of 38K users. Users were connected if they followed at least 15% of the same significant accounts (Minimum 10 accounts with more than 5K Followers). Once users without connections to the primary network were removed, 17K users remained in the network.

Through the usage of a Community Detection Algorithm, 14 main communities were identified. We examined the users in each cluster to identify the affinities they shared, by analyzing their most-followed accounts. 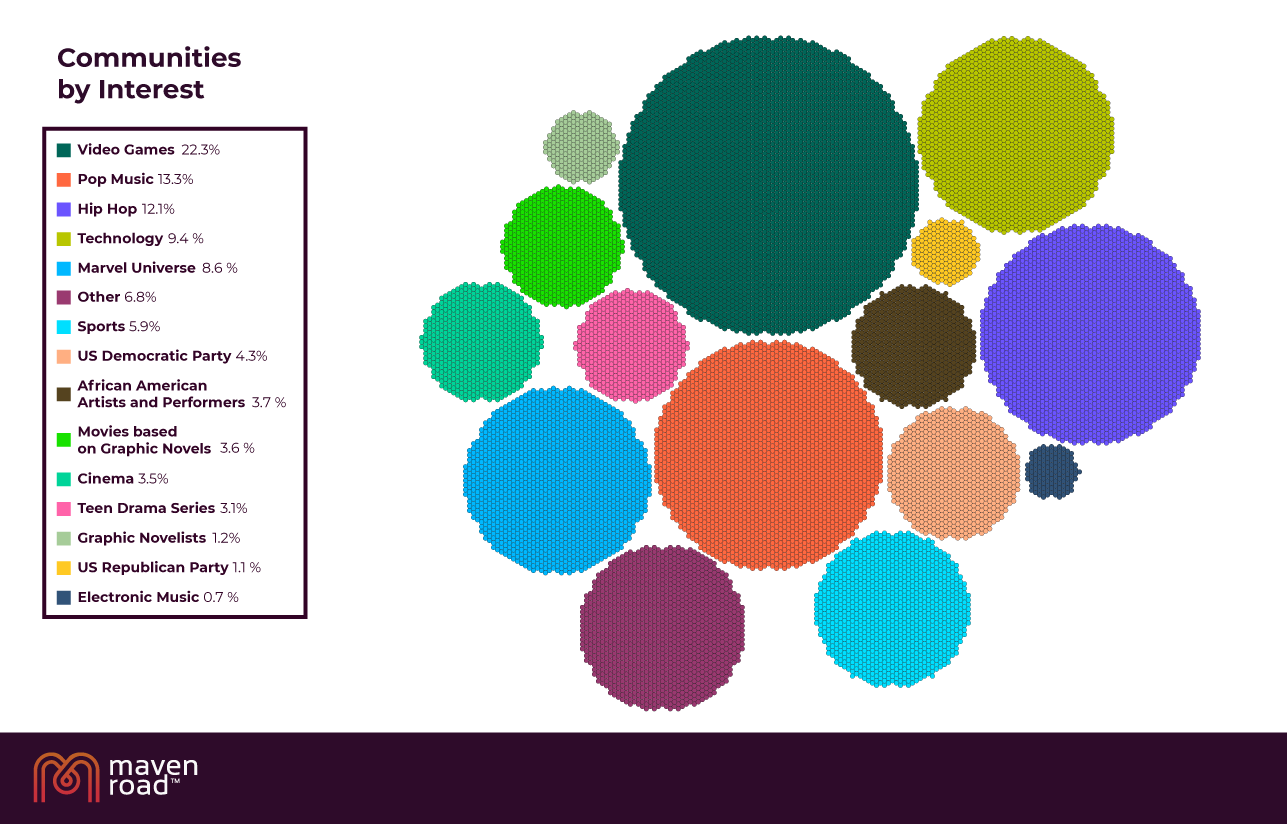 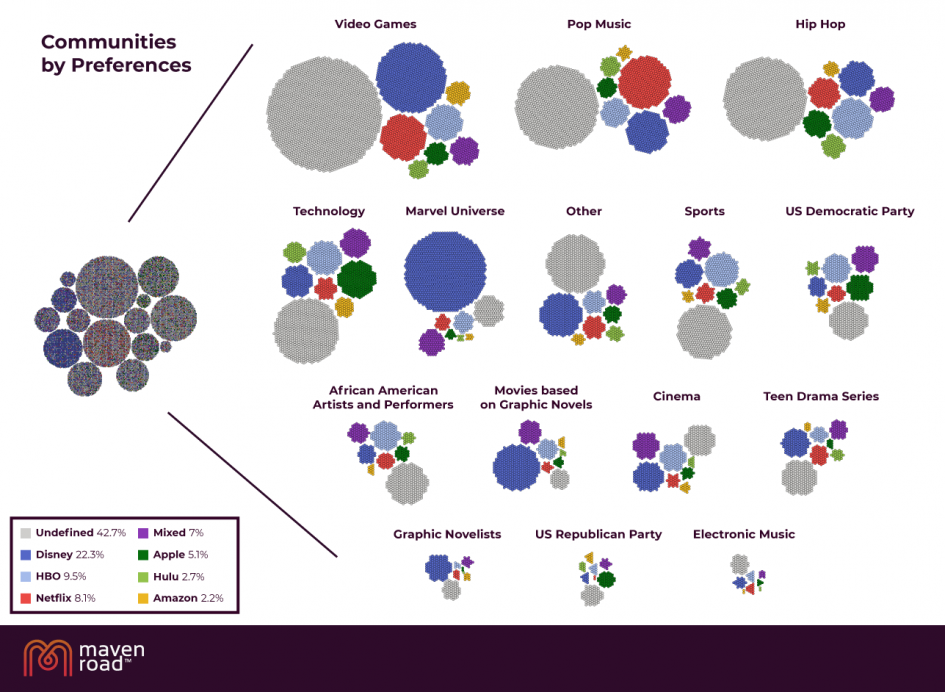 It’s not surprising that the communities that share interests related to the “Marvel Universe”, “Graphic Novelists” and “Movies based on Graphic Novels” were the most likely potential subscribers of Disney+. Given that Disney owns all Marvel-related content, its platform was more relevant across those communities, as they also had a smaller share of undefined and mixed potential subscribers, compared to other communities.

It’s interesting that the community of users interested in technology had greater shares of potential subscribers of AppleTv+ and HBO Go than the other platforms (14.3% and 11.9%, respectively). This may be due to the original content of HBO, which offers technology-related TV shows, such as “Silicon Valley”, “Humans” and “Westworld”, and the fact that Apple is a technology-based brand.

The largest community in the network is composed of users that share an interest in video games (22.3%). It is the one with the greatest share of undefined users that could be driven to one platform or another by content more suitable to their main interests.