Lollapalooza, an event that first launched in 1991, remains one of the country’s most anticipated and talked about music festivals. Chicago’s Grant Park hosted around 400K people this year, at the festival’s 15th anniversary.  Due to the considerable interest surrounding the event on social media, we wanted to explore the topics of conversation and the buzz around the event’s performers. We also wanted to explore the connections between users discussing the festival on Twitter.

News of the event’s line-up dominated the mentions

Lollapalooza ’19 captured the attention of thousands of users on social media, whose conversations spiked when the line-up was announced on March 20th and during the four days of the event. Most of mentions were about the line-up, which included two important firsts: Ariana Grande and J Balvin, the first female and first Latin American, respectively, to take the stage as headliners at Lollapalooza.

Colombian singer J Balvin was the most-mentioned headliner throughout the 4 days of the event, accounting for over a third of the posts about headliners, with 4K posts on Twitter (34.3%). Many posts emphasized the historical moment for Lollapalooza and pride of the Latin American community.

The most-mentioned headliner band from the day the line-up for the festival was announced to a week following the festival’s conclusion was Twenty One Pilots, with a total of 31.5K posts (25% of total headliner mentions), followed by J Balvin (18.2K; 14%) and Ariana Grande (16.3K; 13%).

After understanding the conversations about Lollapalooza on social media, we wanted to identify communities of users discussing the music festival and determine what interests those users share. To do that, we planned to identify the network structure, i.e., how users, posts or communities are connected with each other, and then cluster them into communities.

Identifying communities of users allows us to analyze the traits, behaviors or interests that they have in common; these insights are key to creating and customizing marketing strategies to reach these users in a more engaging and effective way.  We chose to identify communities according to two different criteria: how users follow each other and the interests they have in common.

We wanted to determine what, if any, social circles exist among the 27K users who discussed Lollapalooza on social media, based on which users of interest were following each other. To that end, we created a network structure to represent those connections, using data on the accounts being followed by each user of interest, and identified 10.7K users who were all interconnected in a primary network of social circles. Those users without connections to the primary network of social circles were removed. We then employed a Community Detection Algorithm, which identified social circles / communities among the users, or a “friendship network”.
We then analyzed each of the identified social circles / communities to find a common factor that characterized the respective community. We did this by analyzing the top 50 accounts followed by each social circle.

In the following charts, which graphically depict these communities, the small circles, or nodes, on the graphs represent each user in the network. Each connection between them represents a follow. They were clustered according to the community in which they fall; each color represents a different community. The legend delineates which color corresponds to which common factor, or interest, for each community. 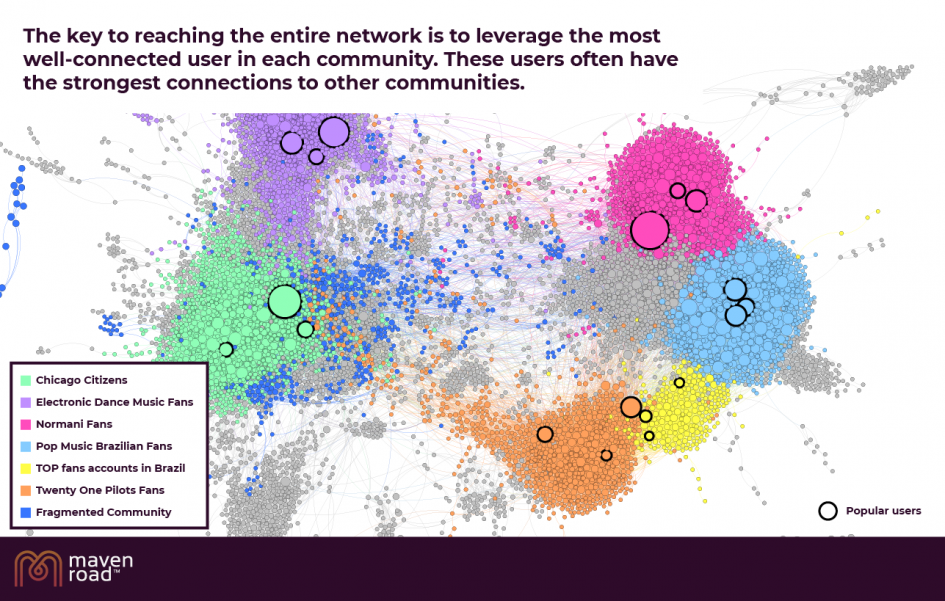 The graph above showcases the main network of users following each other on Twitter. The 7 clusters represent 70% of the users.

Within each cluster, there are accounts that are more connected to users in the network than others; these users are more “popular” inside their respective communities. On the graph, this is represented by the larger circles; the larger the circle, the more popular the user. The Top 3 most popular users in each community own most of the connections in their respective clusters, which likely makes them more influential and the most efficient path for spreading social media content in their communities. 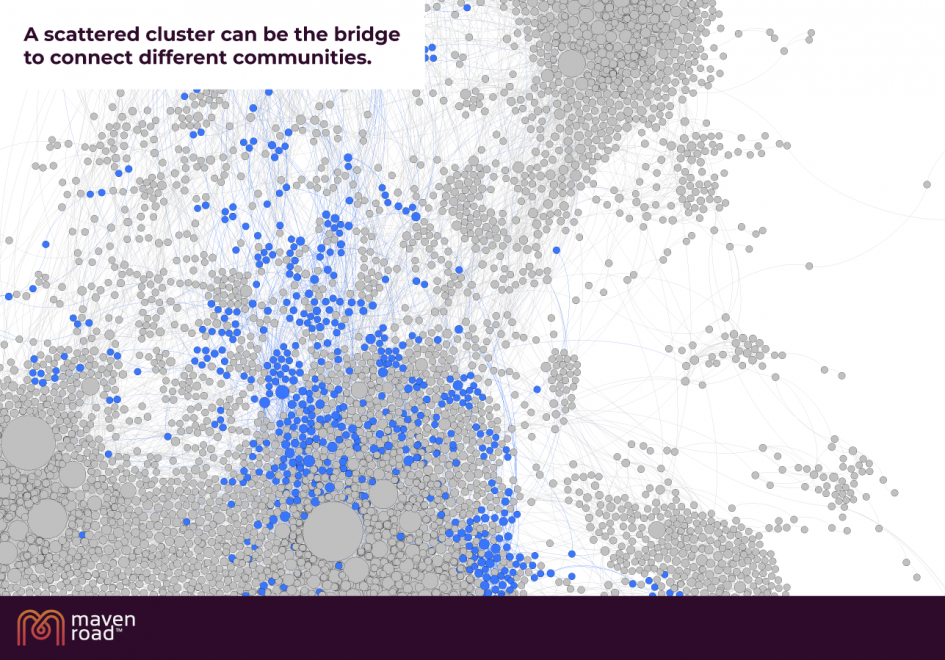 While most of the communities depicted in the graph are made up of users closely clustered together, one stands out for its users being further away from each other; this is called a “scattered” community. There are fewer interconnections between these users and nearly all circles are the same size, meaning the users are not particularly “popular”. Yet these members still are well-connected to other communities. The “scattered” community serves as a connector between other clusters and could be an effective vehicle for broadcasting social media content to different communities. 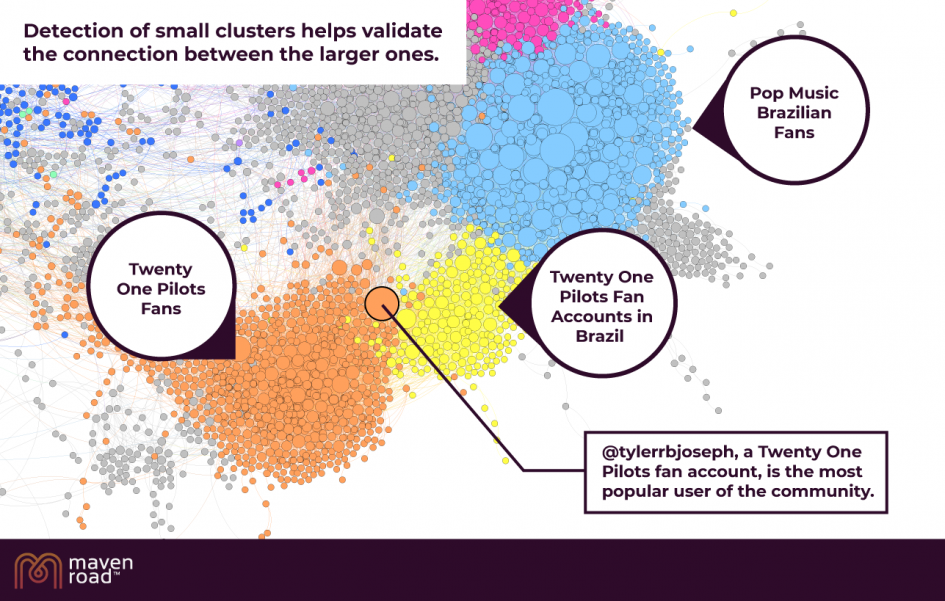 In the second part of our analysis, we created a network connecting users that followed at least 25 of the same accounts. We once again used the data on the accounts being followed by each user of interest and processed the connections between users (this time based on the 25 accounts they had in common). In this case, we identified a primary network of 18K users.
Those users without connections to the primary network of social circles were removed, and the Community Detection Algorithm was applied to identify communities within that network.

We then examined the top 50 accounts followed by the users in each cluster in order to identify the interests that users within the same community have in common.

The 6 largest communities represented 75% of the users. We identified communities according to their favorite music genres, but also observed that users had a wide array of interests.

Exploring the common interests among each of these communities could provide us additional intelligence on the content that would be most appealing to them. These are only a few of the many ways we could have created the network of users talking about Lollapalooza ‘19. Exploring different networks and conducting deeper analysis would provide an even wider range of actionable insights.

Nevertheless, this research on community detection demonstrates that analyzing and interpreting big data in the right way can provide an abundance of actionable information. Community detection is not often employed in social media research and, thus, can provide a significant competitive advantage. This data, complemented with social listening research, can provide valuable intelligence to inform marketing strategies and social media content development.